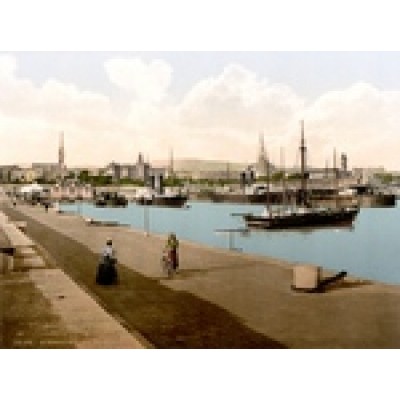 Dún Laoghaire or Dún Laoire), sometimes anglicised as "Dunleary"), is a suburban seaside town and county town of Dun Laoghaire-Rathdown County, in Ireland. The town is situated about twelve kilometres south of Dublin city centre, and is a major port of entry from Great Britain.

The present town of Dún Laoghaire dates from the 1820s. An earlier Dun Laoghaire village was located around the area where "The Purty Kitchen" pub is now located (sometimes mapped as "Old Dun Laoghaire"). Dun Laoghaire had a coffee house, and a small cove, both of which are shown on a number of old maps, and it may have had a salt mine (Salthill is close by). At that time, the area on which the town is currently located was a craggy, rocky pasture area with some quarries.
The events of the night of Nov 18/19 1807 were to lead eventually to the transformation of the area. On that night, the troopships, the Prince of Wales, and the Rochdale, both of which had departed from Dublin, were driven on the rocks between Blackrock and Dun Laoghaire with the combined loss of over 400 lives. This disaster gave new impetus to an existing campaign for a new harbour to be constructed near Dublin. By 1816, the legislation was passed authorising the construction of what is now called the "West Pier". When King George IV came to visit the new port under construction in 1821, the name Dunleary was dropped in favour of the name "Kingstown"; the town returned to its former name with the creation of theIrish Free State in 1921.
Some maps show the commencement of a small town centre along what is now Cumberland St, close to the junction with York Road, but from the 1820s the harbour brought new business to the area, and a new town centre began to form along Georges St. That street may originally have been laid out as a military road connecting the Dún Laoghaire Martello Towers—one at the "Peoples Park", the other near the end of the West Pier—both of which have long disappeared.
Ireland's first railway from Dublin to Kingstown, opened for business in 1834, terminated near the West Pier. It established Kingstown as a preferred suburb of Dublin, and led to the construction of elegant residential terraces. By 1844 the "Atmospheric Train" (designed by Robert Mallet) connected Kingstown to Dalkey, leading to further development. The Atmospheric Train ceased in 1854, but was replaced by the extension of the railway, which was subsequently extended to the ferryport of Rosslare.
The main road to Dublin, through Monkstown village and Blackrock, was the sole road connection to the city of Dublin until 1932. In that year, the Eucharistic Congress, held in Dublin brought thousands of visitors to Dublin, and plans indicated that most of them would come through Dún Laoghaire. The road was considered inadequate, and a new coast road was created by connecting some short segments of road and closing some gardens. This road is now Seapoint Avenue. An agreement with the local residents to restore the area to pre-congress condition was never fulfilled.
The British 59th (2nd North Midland) Division disembarked at Kingston in April 1916 and marched up the road to Dublin, in order to crush the Easter Rising. Adjacent to the Carlisle Pier and overlooked by the National Maritime Museum of Ireland, there is an anchor, recovered from the wreck of the mailboat RMS Leinster which was torpedoed over the Kish Bank in 1918, with the loss of over 500 lives.
Dún Laoghaire was hit by a stray German bomb during World War II, the bomb landing near the People's Park at Rosmeen Gardens. Damage from the bomb was limited to buildings.
Tags: cool, modern, smart, sweet, photography, camera, travel, shop,